Seducing the Demon: Writing for My Life

Erica Jong's memoir-a national bestseller-was probably the most wildly reviewed book of 2006. Critics called it everything from "brutally funny," "risqué and wonderfully unrepentant," and "rowdy, self-deprecating, and endearing" to "a car wreck."* Throughout her book tour, Jong was unflappably funny, and responded to her critics with a hilarious essay on NPR's All Things Considered, which is included in this paperback edition. In addition to prominent review and feature coverage, Jong was a guest on Today and Real Time with Bill Maher. Even Rush Limbaugh flirted with Jong on his radio program: "I think she wants me. I think she's fantasizing about me." Love her, hate her, Jong still knows how to seduce the country and, most important, keep the pages turning.

"In four discursive essays and an introduction, Jong (Fear of Flying; Any Woman's Blues) ruminates on the elements of her writer's life. Most notable is sexuality: pursuit of the muse has often meant pursuit of a demon lover, a man utterly wrong for her. She walks away from Ted Hughes in the 1970s, but not from many other wrong men. Jong has had four husbands, one child and 20 books in the past four decades. Now in her 60s, she's well-read, well-traveled, therapized, happily married and sexually satisfied. Her memoir in vignettes asserts that without writing, Jong would go crazy, drink well beyond the excesses of her past and be miserable. Writing has propelled her forward into a fulfilled life. There is a fine section on women writers who pursued death (Plath, Sexton, Woolf); Jong explains why she refused to be one of them. These chatty, gossipy essays are just serious enough to count as literary. Jong, however, shrugs off the immense economic privilege that allowed her to write and travel from adolescence and meet famous people who influenced her writing early. She also never explains how she writes. Engaging and amusing, this work is less substantive than it could or should be."
—Publishers Weekly 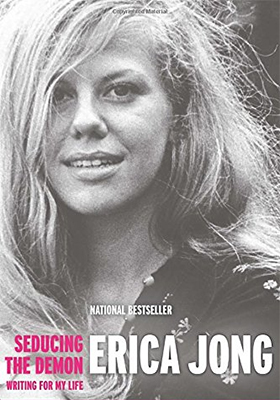 Seducing the Demon: Writing for My Life